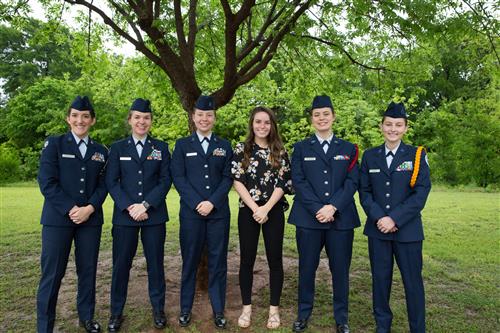 “I come from a lower middle-class family and college is very expensive,” said Ashlyn Clark. “While there is financial aid, often times it doesn’t cover the full extent of what college is going to be and college debt is a serious issue and so with the ROTC scholarship, it definitely helps me get ahead of the game and not go into debt and have to structure my adult life around student loans.”

Ashlyn earned a Type II, US Air Force Scholarship valued at over $200,000 with college matching money. She will be attending the University of North Carolina at Chapel Hill in the fall where she will major in biomedical engineering. When she graduates from college, she will have earned a degree and be commissioned as a Second Lieutenant in the United States Air Force, moving into a career with the U.S. Department of Defense.

Jessica Gamsjager, recalls a conversation with her parents at a young age that helped her realize the need to focus in the classroom in order to attend college one day.

“While in middle school, I asked my parents – did you put any money away for my college?” said Jessica. “They said, no, we expect you to get scholarships, I knew I really needed to figure out how scholarships work and how I can provide for myself.”

Jessica and alongside Cassidy Jester will be attending the U.S. Merchant Marine Academy this fall, located in Kings Point, NY. More than 2,200 applicants worldwide applied, and Jessica and Cassidy were two of only 280 appointees selected.

Both earned scholarships valued at $265,000 each to attend the academy and will spend one year of their college experience working on a ship at sea.

Madison Miller received an Army ROTC scholarship to attend Texas A&M University valued at $102,000. She plans to graduate with a Bachelor of Science degree in Nursing. Upon college graduation, Madison will be commissioned as a Second Lieutenant in the United States Army.

“I come from a Texas A&M family; I have two brothers and my mom is a single mom,” said Madison. “My mom put herself through college with us as little kids and just knowing she had that drive, and that passion to be able to complete her education inspired me. I just knew that this is what I want to do. No matter what happens, I’m going to make it through college.”

For Kaitlin Koralewski, the past four years have been all about pursuing her dream of flying. Nearly 14,000 high school seniors applied for admission to the U.S. Air Force Academy and Kaitlin was one of 1,350 to receive an offer.

“I received a Falcon Foundation scholarship which pays for almost 75 percent of your first year at a prep school. So, I’m going to be going to New Mexico Military Institute (NMMI),” said Kaitlin. “In five years, I hope to have graduated from the U.S. Air Force Academy and my passion is to fly so whatever it takes to get there, that’s what I’m going to do.”

After earning a Bachelor of Science degree, in either political science or aeronautical engineering, she will also be commissioned as a Second Lieutenant in the U.S. Air Force, an appointment valued at $435,000.

Aris Quiroz knew her dad worked really hard to support their family, and at one point he held three jobs simultaneously to support them. Neither of her parents went to college initially, however her father recently went back to college and is just now finishing his degree. Knowing that this scholarship will ease the burden on her family is a great feeling.

“I knew that college was super important if I wanted to have a successful life and just be able to not worry about money like my parents had to,” said Aris. “Getting this scholarship was an amazing opportunity just to prove to myself that I can achieve something like that. So, this opportunity was just perfect for me and just not having to worry about money and take that stress off my parents and myself and it’s just a great opportunity and I’m super excited to go to Air Force.”

Aris competed against 15,000 high school seniors from across the country. Less than eight percent of the applicants were awarded scholarships. She will attend Northern Arizona University and major in Biology. Upon graduation from college, she will earn a Bachelor of Science degree and be commissioned as a Second Lieutenant in the U.S. Air Force where she plans to become a weapons systems operator on an F-15E Strike Eagle. The total value of her scholarship is $115,500.

As decorated and accomplished as each of these young ladies are, they all credit their time in at Guyer High as the catalyst and the key element that propelled them to such bright futures.

“When I joined, I just got super involved and did everything that I could,” said Aris. “I did all the community service, all the drill team stuff, all the color guard stuff just so that I could get as much experiences as possible. Through that I realized, I want to be a leader and I want to influence people. ROTC really helped me grow into that and when I found out about the scholarships I was like, this is just a win, win situation.”

For Jessica, leadership and service were equally important. “I decided to join ROTC to get some experience in military leadership because I don’t have any family members that are military,” she said. “My pursuit for learning how to lead came from my heart as did my interest in military service. It just fell into place. All the leadership positions I’ve had is just me wanting to serve other people.”

With college secured, the focus turns to what the future may bring.

“By accepting the ROTC scholarship, you accept the path of service,” said Ashlyn. “And for me, I grew up in a family with a whole bunch of science nerds. Plus, one of my family members way back worked for NASA so that is my end goal.”